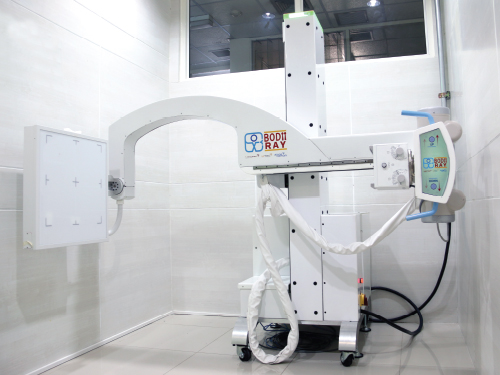 BodiiRay, has been developed under the “Development of Digital X-ray system” project. Digital Radiography (DR) is a technology which is now replacing the film-cassette based radiography. The DR system can yield instant radiographic images for the doctors to examine the patients. Since the DR system has many advantages over the film-cassette based one, many hospitals in Thailand want to upgrade their systems to be digital radiography systems. However, imported DR systems are costly. Most small public hospitals do not have sufficient budgets to purchase these systems.

A research team from MTEC and NECTEC jointly developed an affordable digital radiography system called BodiiRay. This prototype of the U-arm DR system consists of a flat panel detector, an x-ray unit, and developed software. Once the prototype was completed, the performance test has been done in the lab, including the electrical safety test by PTEC. The result showed that the prototype has basic features comparable to those of the commercial systems.